We all want our children to listen well, but how do they learn this vital skill? As we dig up the soil to look at the roots, we find that the ability to listen is closely connected to a toddler’s emotional and social development – and that active music is like a superfood that helps boost their learning.

Ever met a parent that doesn’t care whether their kids listen? I haven’t. And judging by popularity that Adele Faber & Elaine Mazlish’s excellent parenting book “How to Talk so Kids Will Listen and Listen so Kids Will Talk” enjoys, it’s a high priority for many parents. Children who pay attention are a joy to have around (unless you’re trying to sort out Christmas presents) and life is just much more harmonious when you don’t have to repeat every instruction a million times. So when I got my hands on this book when my oldest was about two, I practically devoured it, eager to implement the wonderful bits of sage advice gleaned from its 300odd pages. However, biology threw a spanner in the works. My son was simply not ready to have the kinds of conversations modelled in the book. Unable to access his fairly extensive vocabulary during emotionally charged situations and reluctant to follow verbal instructions much of the time, he appeared to need something more basic, visceral, hard to quantify. If the ability to listen was like a plant then he needed to grow the roots! Where was the prequel to “How to Talk”?

It may sound obvious, but with the exception of instinctive behaviours such as breathing, sucking and swallowing, newborns have to learn literally everything. How to see, move, understand themselves and make themselves understood. At the baby stage, I was quite aware of this, but as time and toddlerhood wore on, this became less obvious. After all, Junior was able to move around independently and use words both to describe the world around him and get what he wanted.

What I didn’t realise was that toddlerhood – between the ages of one and three – is a key window for the process of becoming a “social being”. According to early childhood experts, this is when the little person normally forms key insights about herself and those around her. The dawning realisation that mum and tot are separate beings, emotionally attached but with differing points of view, lays the foundation for the development of empathy – the ability to take into account more than one perspective, to feel yourself “into” the skin of another [1]. And these insights are the foundation for what we term social skills – turn taking, sharing, waiting and empathising.

Without the ability to entertain someone else’s point of view, social skills simply don’t make sense.

A 10-month-old doesn’t get the concept of sharing. She may not be particularly attached to a certain toy and therefore relinquish it quite happily to another child, but the the concept of sharing isn’t there yet. At this age, children simply lack the neural connections. If all goes well, these will form and mature over the next two years, leading to the development of impulse control, empathetic behaviour and the acquisition of social skills.

If all goes well. We know a lot about what happens if all does not go well. Autistic spectrum disorders have come to the fore in recent years as a cluster of conditions where some of these key insights have developed only partially or not at all. While there appear to be genetic/ physiological components that make it harder for some children to acquire these insights, we know that that under certain conditions such as severe neglect – a lack of “opportunities to participate in emotionally satisfying interactions”[2] – even children that are not genetically predisposed can develop autistic-like behaviour.

So how do we get it right? Sue Gerhardt observes that “the human baby has to be invited to participate in human culture. The first step […] is to get the baby hooked on social interaction itself by making it highly pleasurable.”[3] Just as children need a healthy, balanced diet in the context of positive and regular mealtimes in order to both grow and develop healthy eating habits, in the same way they need a steady diet of pleasurable social interactions, of “sustained shared attention”, in the context of a strong and healthy attachment in order to develop as social beings.

“Sustained shared attention” is a somewhat technical term for what has also been termed the dance of communication: parent and child each focusing on the same thing – each other or, as time goes on, something outside of themselves – for an extended period of time. It’s why we make faces at infants but talk about objects with toddlers, deliberatly drawing their attention to interesting things like the clock on the wall or the doggie in the park. In the process, children learn not just how to pay attention to things, but to people – because people are the facilitators to having a good time!

So how do we give our young ones enough of this sustained shared attention? There is much advice out there – all of it common sense and much of it now backed by solid science. Switch off screens, make plenty of eye contact, get down on our children’s level so they can see our eyes when we talk to them, spend time reading to our children and point out things as we are out and about. All of this is fantastic, and, to quote Simone Weil, “Attention is the rarest and purest form of generosity”.

However, in my opinion, there is too little emphasis on how to nurture the ability to listen. In our visually dominated culture, this is a skill that is deteriorating measurably among our young ones[4], to the detriment of not just their language skills, but their social skills as well. After all, we need language to know ourselves, our emotions, and to communicate these appropriately to keep the human show on the road. 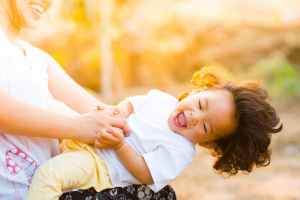 One way of giving our children their “five a day” of sustained shared attention is usually mentioned in passing, along with the other “dos”, and that is singing. As a music teacher, I am of course especially interested in this, and maybe one reason I am plugging it so much is because I just love to sing. However, I’m convinced it’s more than that. My observation from teaching music classes for babies and toddlers (and their grown-ups) is that these young children are extraordinarily receptive to music. They perk up visibly when the singing starts, keenly observing everything that is going on, moving in time to the music, increasingly copying pitches and rhythms, anticipating the punchline of a tickling rhyme, or getting the “bang” in “Ten Fat Sausages” spot on. They are paying attention with the whole of their little beings, all of their senses united in this endeavour – vision, hearing and proprioception (the sense of how their bodies are moving in space). The result is pure magic. It is what I love the most about teaching – capturing those precious children’s attention and holding it gently while taking them on a journey of adventure, magic and joy.

If we want our children to pay attention to us, we need to give them something worth paying attention to!

And so I believe that if we want our children to pay attention to us, we need to give them something worth paying attention to! Singing, knee-bounces, tickling rhymes and clapping games are such great fun, such a joy to children and grown-ups – the perfect way of connecting with our children in a fast-moving world that seeks to crowd out the personal with the virtual. And the more time they spend honing this skill of paying attention – listening – when they enjoy it as toddlers, the more they will be able to do so when the motivation is lower, when we want them to get their coats on to get out of the house, or when focusing at school requires a conscious decision to do so.

Singing with our children makes them alert, capable and resilient – the superfood of human communication and connection. And what’s more, it’s free and always on hand!

Watch out for the next part in this series: “Learning to Listen: Mind the Gap” on the widening gulf between children from families rich and those poor in positive attention, and the effects this has on them individually and society as a whole.

[4] In the fifteen years leading up to the new millennium, Dr Sally Ward, investigating nine-month-old infants’ ability to selectively listen to the sound of their mothers’ voices over and above background noise, demonstrated that the proportion of babies unable to do so doubled from 20% to 40%, clearly demonstrating a worrying upward trend. Sue Palmer (2006), Toxic Childhood p.113

View all posts by Nadja Flowerdew

I love children, music and being alive. I am mum to three lively, lovely children and teach music at the Len Tyler Music School.